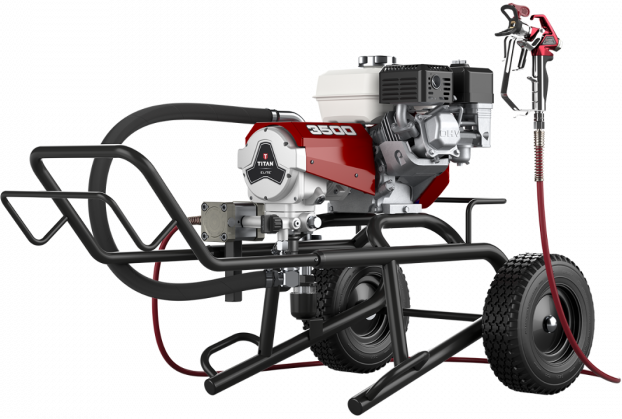 The elite 3500 is considered to be a revolutionary Perma stroke and it comes with durability which lasts for a lifetime.

The best quality about this series is that the packing and the coating of this series can easily be replaced. Not just that but for the backup of this amazing series, it also comes with a fluid pump to save in an emergency.

This is a hydraulic paint sprayer that is sealed and also comes with the titan packing kits to be used in the state of urgency.

The direct drive of this amazing paint sprayer series is versatile. This sprayer also has the ability to keep the contractors on their right job.

The added amazing feature of this series is that it comes with fine finishing and it can be easily be operated by the people that are using it. It is also field serviceable.

What Are Its Features?

The first feature of this series is that it uses permastroke technology. It consists of one piece inlet and the outlet valves. It is also a hundred percent field serviceable.

The most amazing thing about this part is that all of its objects like a cylinder, packing and the piston do not ever wear out which makes it stand out of all the other sprayer series.

The next feature is that it has a pulsation dampener. If you did not understand it we will simplify it for you. This feature means that it deducts all the fluctuations that are coming into it while using the pressure.

Not just the fluctuations but it also dampen the dead band that is present in the system. The best part about this series is that it does not consist of any electric part that might burn because it is a gas liner series.

Because of this specific feature, the operation of this sprayer is really fine and smooth.

The next feature about this series is that it comes with a pusher valve which has made its priming really easy and fast.

The last feature that we are going to discuss about this amazing sprayer is its pump filter. The pump filter that is used on this series is the no-spill pump filter.

This means that all the coatings that are inside the sprayer are held by its vertical designed housing when they are removed which does not cause any kind of spillage.

This feature makes this paint sprayer very easy and also very clean to use and makes it work better than other sprayers.

You can get this series from all titan parts and can use it wherever you want to.