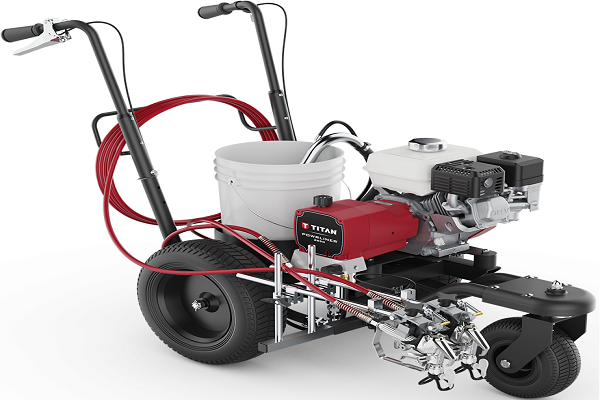 From all the separate sprayers to the series sprayer, titan has always worked immensely hard to bring the best to its customers.

The sprayers by titan are all really efficient and they have always made their names in the industry by what they have delivered and how amazing their performance is.

In this article, we are going to talk about one of those series that is the powrliner series and we will also discuss all the good that it has brought to the people or users of this sprayer.

Powrliner series is the one that is built with technology that is able to deliver stripes that are the best in class with a line quality that is very sharp and very consistent even on all the surfaces that ate thought to be tough.

The powrliner series comes with a lot of different types that are ranging from powrliner 850 to powrliner 8955.

All these powrliner series types come with a GPM starting from 0.33 to 2.50 GPM. The tip sizes also vary from one another and each one of them works according to that.

Some of them come with a clutch-driven technology, some use the permaStroke technology while others work speeflo Hydradrive technology.

The only thing that is common between all the types of the Powrliner series is that all of them work really well and really efficiently and do the job perfectly as well.

Coming to the main part of this series, we would like to talk about the features that come with them. We will discuss all of them in detail.

The first feature that we think should be talked about is that this series is very versatile. We are saying this because it helps you in working on both the pavements, as well as the athletic fields.

We know one thing that each one of the contractors is wondering about is the design. So, we would want to say that it is made with a design that is extremely user-friendly and you can easily operate it anywhere without any assistance.

The best part about this sprayer is that it comes with precise pressure control that ranges between 400 to 3300 Psi.

This pressure control helps you paint anything between the coatings that are light-bodied to the low striping painting.

The next feature that we would like to mention here is that this sprayer comes with a powrcenter that is designed in a way that is very convenient to use and can be controlled very easily too. This sprayer also comes with extra features like a cup holder, tip holder, as well as a charging port.

One thing that we are sure you want to know about this sprayer is that it also comes with a smart arm that is there to lift and pivot and to make the process of transportation very easy and very fast.